After the Sunset Movie 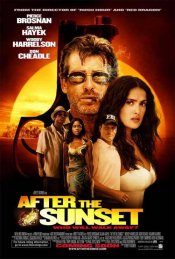 Max "The King of Alibis" Burdett and his beautiful accomplice Lola have come to Paradise Island in the Bahamas, fresh off their final big score in which they lifted the second of the three famous Napoleon diamonds. With their financial future set, the couple is ready to relax and enjoy their hard-earned riches. But Stan, the FBI agent who has spent years in dogged but failed pursuit of Max, refuses to believe that his nemesis is actually calling it quits. He thinks that Max and Lola are actually plotting to steal the third Napoleon diamond--one of the three largest non-flawed diamonds in the world--which is coincidentally scheduled to arrive on Paradise Island as part of a touring cruise ship exhibition. Since he has no jurisdiction in the Caribbean country, Stan teams with a local cop and sets out to catch the sly Max and Lola in the act, while at the same time a local gangster has his own plans for the diamond. When the longtime adversaries meet up in paradise, Max quickly turns the tables and befriends the frustrated detective, showing him that Paradise Island has no shortage of pleasures to offer. But in order for Stan to figure out exactly what Max and Lola are up to, he will have to navigate all the twists and double-crosses of an action-packed story of friendship, suspicion and thievery.

Poll: Will you see After the Sunset?

A look at the After the Sunset behind-the-scenes crew and production team. The film's director Brett Ratner last directed Hercules and Movie 43.

Watch: After the Sunset Trailers & Videos

Production: What we know about After the Sunset?

After the Sunset Release Date: When was the film released?

After the Sunset was released in 2004 on Friday, November 12, 2004 (). There were 4 other movies released on the same date, including Seed of Chucky, Bridget Jones: The Edge of Reason and Noel.

Q&A Asked about After the Sunset

Looking for more information on After the Sunset?