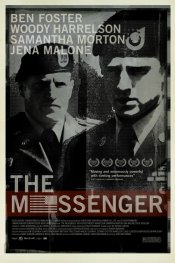 In his most powerful performance to date, Ben Foster stars as Will Montgomery, a U.S. Army officer who has just returned home from a tour in Iraq and is assigned to the Army’s Casualty Notification service. Partnered with fellow officer Tony Stone (Woody Harrelson) to bear the bad news to the loved ones of fallen soldiers, Will faces the challenge of completing his mission while seeking to find comfort and healing back on the home front. When he finds himself drawn to Olivia (Samantha Morton), to whom he has just delivered the news of her husband's death, Will’s emotional detachment begins to dissolve and the film reveals itself as a surprising, humorous, moving and very human portrait of grief, friendship and survival.

Poll: Will you see The Messenger?

Crew: Who's making The Messenger

Production: What we know about The Messenger

The Messenger Release Date: When was it released?

The Messenger was released in 2009 on Friday, November 13, 2009 (in 4 theaters . There were 6 other movies released on the same date, including 2012, Pirate Radio and Women in Trouble.

Questions: Asked About The Messenger

Looking for more information on The Messenger?