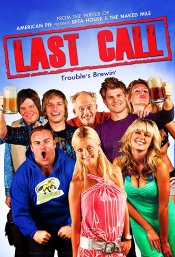 July 28, 2018 • Awaiting release by distributor; release date not yet announced.

Danny and Phil O'Donnell are chronically underachieving cousins, who are forced to run the family pub, in order to save their crazy Uncle Pete from jail and financial destitution. The boys instigate a number of hilarious schemes, from turning the pub into a strip club to a high school speakeasy, just to keep it afloat.

Poll: Will you see Last Call?

"American Reunion" , "Alone in the Dark"

A look at the Last Call behind-the-scenes crew and production team.

Production: What we know about Last Call?

Last Call Release Date: When is the film coming out?