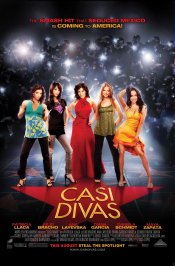 Four ambitious and beautiful young women. From four very different corners of Mexico. Just like hundreds of others, they are caught up in the frenzy that sweeps the nation when Alejandro Mateos (Julio Bracho), one of the country's most powerful producers, dreams up a nationwide talent search to cast the lead in his next big movie.

Poll: Will you see Casi Divas?

Production: What we know about Casi Divas

Casi Divas Release Date: When was it released?

Casi Divas was released in 2009 on Friday, August 21, 2009 (in 22 theaters . There were 11 other movies released on the same date, including Shorts, X Games 3D: The Movie and Inglourious Basterds.