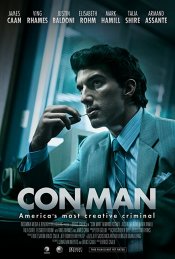 The bizarre story of a teenage entrepreneur running a successful carpet company, ZZZZ Best, who gets busted for running a Ponzi scheme. After experiencing a religious conversion in prison, Minkow becomes a pastor doing anti-fraud work with the FBI.

Poll: Will you see Con Man?

The Match, The Family Business (Series)

The Machine, Kingsman: The Secret Service

A look at the Con Man behind-the-scenes crew and production team.

Production: What we know about Con Man?

Con Man Release Date: When was the film released?


Con Man was a Limited release in 2018 on Friday, March 2, 2018. There were 8 other movies released on the same date, including Red Sparrow, Death Wish and The Lullaby.
As a Limited release, Con Man will only be shown in select movie theaters across major markets. Please check Fandango and Atom Tickets to see if the film is playing in your area.