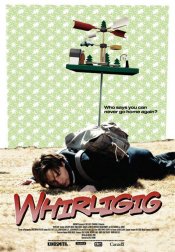 When a young man attempts to woo an older woman, he winds up befriending her adopted son.

Poll: Will you see Whirligig?

Production: What we know about Whirligig

Whirligig Release Date: When was it released?

Whirligig was released in 2011 on Friday, May 6, 2011 (Limited release). There were 15 other movies released on the same date, including Thor, Jumping the Broom and Something Borrowed.

Looking for more information on Whirligig?