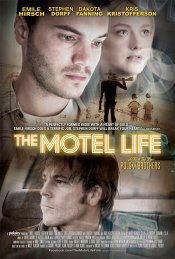 After Jerry Lee Flannigan drunkenly kills a boy in a hit-and-run accident, he and his brother Frank ditch their Reno motel. The grief-stricken, working class, self-described “losers” do their best to keep each other’s spirits up, but all signs point toward more tragedy.

Poll: Will you see The Motel Life?

Crew: Who's making The Motel Life

A look at the The Motel Life behind-the-scenes crew and production team. The film's director Gabe Polsky last directed Red Penguins and Red Army. The film's writer Micah Fitzerman-Blue last wrote A Beautiful Day in the Neighborhood and Maleficent: Mistress of Evil.

Production: What we know about The Motel Life

The Motel Life Release Date: When was it released?

The Motel Life was released in 2013 on Friday, November 8, 2013 (Limited release). There were 10 other movies released on the same date, including Thor: The Dark World, The Book Thief and About Time.

Questions: Asked About The Motel Life

Looking for more information on The Motel Life?