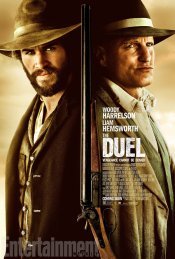 The Duel stars Liam Hemsworth as a Texas Ranger who investigates a series of murders in a small town led by a charismatic preacher played by Woody Harrelson. However, the routine undercover investigation soon turns personal for the ranger who must solve the case before he loses everything to the mysterious town.

Poll: Will you see The Duel?

A look at the The Duel behind-the-scenes crew and production team. The film's director Kieran Darcy-Smith last directed Wish You Were Here and Say Nothing. The film's writer Matt Cook last wrote The Informer and Triple 9.

Production: What we know about The Duel?

Kieran Darcy-Smith is now attached to direct the film. Not set up at a studio.

The Duel Release Date: When was the film released?

The Duel was released in 2016 on Friday, June 24, 2016 (Limited release). There were 11 other movies released on the same date, including The Shallows, Free State of Jones and Independence Day Resurgence.

Q&A Asked about The Duel

Looking for more information on The Duel?