What's Gotten Into You? 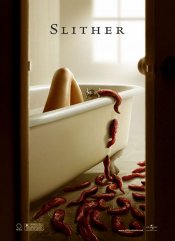 The sleepy town of Wheelsy could be any small town in America – somewhat quaint and gentle, peopled with friendly folks who mind their own business. But just beneath the surface charm, something unnamed and evil has arrived…and is growing. No one seems to notice as telephone poles become clogged with missing pet flyers, or when one of the town's richest citizens, Grant Grant (Michael Rooker), begins to act strangely. But when farmers' livestock turn up horribly mutilated and a young women goes missing, Sheriff Bill Pardy (Nathan Fillion) and his team, aided by Grant's wife Starla (Elizabeth Banks), uncover the dark force laying siege to their town… and come face-to-face with an older-than-time organism intent on absorbing and devouring all life on Earth.

Poll: Will you see Slither?

"Power Rangers" , "The Next Three Days"

Production: What we know about Slither?

Slither Release Date: When was the film released?

Slither was released in 2006 on Friday, March 31, 2006 (). There were 5 other movies released on the same date, including Ice Age 2: The Meltdown, Basic Instinct 2 and Lucky Number Slevin.

Looking for more information on Slither?