I Am Love Movie 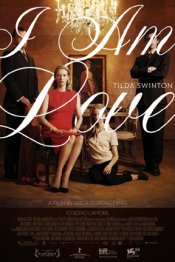 I Am Love Plot: What's the story?

"I Am Love" tells the story of the wealthy Recchi family of Milan, whose lives are rapidly changing. The family patriarch has surprised the family by willing shared ownership of his massive industrial company to both his son Tancredi (Delbono), and his grandson Edoardo Jr. (Parenti). Meanwhile, Edoardo Jr. has other plans, dreaming of opening a restaurant with a talented chef friend, Antonio (Gabbriellini). At the heart of the family is Tancredi's wife and Edoardo Jr.'s mother, Emma (Swinton), a Russian immigrant who has adopted the culture of Milan, and whose existence is shaken when she enters a passionate love affair with her son’s friend Antonio.

Poll: Will you see I Am Love?

I Am Love Cast: Who are the actors?

Crew and Production Credits: Who's making I Am Love?

I Am Love Trailers & Videos

Production Timeline: When did the I Am Love come together?

I Am Love Release Date: When was it released?

Questions: Frequently Asked About I Am Love

Looking for more information on I Am Love