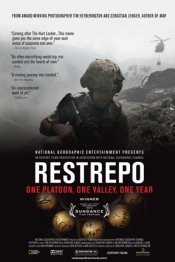 A year with one platoon in the deadliest valley in Afghanistan.

Over the course of one year, the film follows the Second Platoon in Afghanistan's Korengal Valley, a stronghold of al Qaeda and the Taliban, and observe the soldiers' back breaking labor, deadly firefights, and camaraderie as they push back the Taliban.

Poll: Will you see Restrepo?

A look at the Restrepo behind-the-scenes crew and production team.

Production: What we know about Restrepo

Restrepo Release Date: When was it released?

Restrepo was released in 2010 on Friday, June 25, 2010 (in 2 theaters . There were 5 other movies released on the same date, including Grown Ups, Dogtooth and Wild Grass.

Looking for more information on Restrepo?