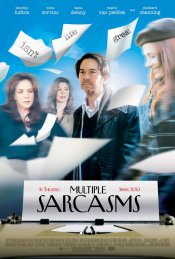 Gabriel is a man who on the surface has it all: successful professional life as an architect, a beautiful wife, and a devoted young daughter. Yet, it slowly dawns on him that he is not really happy. Gabriel decides that he wants to write a play about the sorry state of his life. He quits his job, gets a pushy literary agent friend to represent him and starts writing.

Poll: Will you see Multiple Sarcasms?

A look at the Multiple Sarcasms behind-the-scenes crew and production team.

Production: What we know about Multiple Sarcasms?

Multiple Sarcasms Release Date: When was the film released?

Multiple Sarcasms was released in 2010 on Friday, May 7, 2010 (in 15 theaters . There were 6 other movies released on the same date, including Iron Man 2, Mother and Child and Babies.