The Plastics are Back! 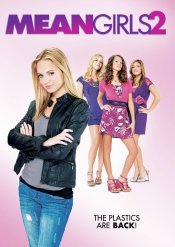 Story revolves around a new high school student, Jo, who agrees to befriend an outcast, Abby, at the urging of Abby’s wealthy father in exchange for paying all of Jo’s costs for the college of her dreams. Jo and Abby team up to take on the school’s "mean girls," the Plastics.

Poll: Will you see Mean Girls 2?

Production: What we know about Mean Girls 2

Mean Girls 2 Release Date: When was it released?