Alone in the Dark Movie 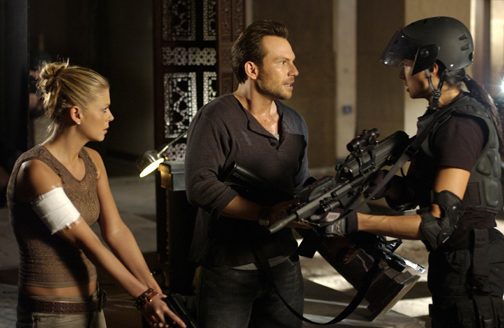 You wake up in the middle of the night with the feeling someone is in the room with you. You get a flash of panic as you fumble for your bedside lamp. But when you turn on the light, no one is there. You might feel safe…but just because you can't see something doesn't mean it's not there. Watching. Waiting. Existing at the fragile boundaries of our perception. There is a world around us, a world most of us never see - or never want to see. As a child, Edward Carnby was given irrefutable proof of that world. He hasn't slept well since. Now, twenty years later, Edward is a paranormal investigator. When the irrational and the inexplicable become undeniable, he is there. He is not out to change your mind. But he may be the only one who can save your life. Now, the greatest mystery of Edward's past is about to become the most dangerous case he has ever faced. Nineteen people have disappeared, and they have only one thing in common—each one grew up in the same orphanage as Edward. Looking for answers, Edward learns that an ancient artifact of considerable power has been discovered in a long-lost shipwreck. Amidst mounting danger, he turns to Aline Cedrac, a brilliant anthropologist who's also his ex-flame - and the only person he really trusts. In a world of ancient evils, lost civilizations, shadowy government conspiracies, and deadly paranormal threats, Edward and Aline come together to confront a supernatural enemy unlike anything they've ever seen before…one whose very existence could threaten all humankind.

Poll: Will you see Alone in the Dark?

Who stars in Alone in the Dark: Cast List

A look at the Alone in the Dark behind-the-scenes crew and production team. The film's director Uwe Boll last directed Attack on Darfur and In the Name of the King: A Dungeon Siege Tale. The film's writer Elan Mastai last wrote What If and The Samaritan.

Production: What we know about Alone in the Dark?

Alone in the Dark Release Date: When was the film released?

Q&A Asked about Alone in the Dark

Looking for more information on Alone in the Dark?