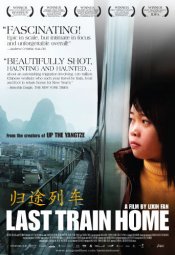 A family embarks on an annual journey, along with 200 other million peasant workers, to reunite with their distant family.

Production: What we know about Last Train Home

Last Train Home Release Date: When was it released?

Last Train Home was released in 2010 on Friday, September 3, 2010 (Limited release). There were 7 other movies released on the same date, including Machete, Going the Distance and The Winning Season.