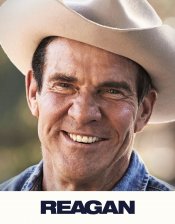 April 10, 2021 • Filming completed; editing of shot film; music composition and recordings, as well as sound and visual effects being added.

The story of Ronald Reagan's life from boyhood to Hollywood actor to leader of the free world.

Poll: Will you see Reagan?

A look at the Reagan behind-the-scenes crew and production team. The film's director Sean McNamara last directed Mighty Oak and The Miracle Season.

Production: What we know about Reagan?

Shooting this fall. Aiming for a summer 2019 release.

Reagan Release Date: When is the film coming out?

Looking for more information on Reagan?