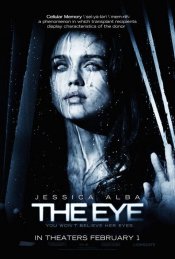 A blind woman undergoes a corneal transplant that restores her sight. Her new eyes, however, allow her to see ghosts. The woman sets out to uncover the origins of her cornea and the history of its donor...

Sydney Wells (Jessica Alba) is an accomplished, independent, Los Angeles-based concert violinist. She is also blind, and has been so since a childhood tragedy. As our story opens, Sydney undergoes a double corneal transplant, a surgery she has waited her whole life to have, and her sight is restored. After the surgery, neural ophthalmologist Dr. Paul Faulkner (Alessandro Nivola) helps Sydney with the difficult adjustment, and with the support of her older sister Helen (Parker Posey), Sydney learns to see again.But Sydney's happiness is short-lived as unexplainable shadowy and frightening images start to haunt her. Are they a passing aftermath of her surgery, Sydney's mind adjusting to sight, a product of her imagination, or something horrifyingly real? As Sydney's family and friends begin to doubt her sanity, Sydney is soon convinced that her anonymous eye donor has somehow opened the door to a terrifying world only she can now see. THE EYE is a bone-chilling supernatural thriller that tests the boundaries of perception and reality.

Poll: Will you see The Eye?

Crew: Who's making The Eye

A look at the The Eye behind-the-scenes crew and production team. The film's writer Sebastian Gutierrez last wrote Elizabeth Harvest and Elektra Luxx.

Production: What we know about The Eye

The Eye Release Date: When was it released?

The Eye was released in 2008 on Friday, February 1, 2008 (). There were 3 other movies released on the same date, including Over Her Dead Body, Hannah Montana/Miley Cyrus: Best of Both Worlds Concert Tour and Strange Wilderness.

Questions: Asked About The Eye

Looking for more information on The Eye?