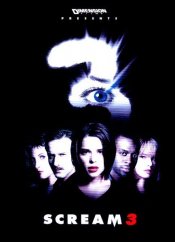 While Sidney Prescott (Neve Campbell) lives in safely guarded seclusion, bodies begin dropping around the Hollywood set of Stab 3, the latest movie sequel based on the gruesome Woodsboro killings! And when the escalating terror finally brings her out of hiding, Sidney and other Woodsboro survivors are once again drawn into an insidious game of horror movie mayhem. But just when they thought they knew how to play by the rules, they discover that all the rules have been broken.

Poll: Will you see Scream 3?

Human Capital, Across the River and Into the Trees

A look at the Scream 3 behind-the-scenes crew and production team. The film's director Wes Craven last directed Scream 4 and My Soul to Take. The film's writer Kevin Williamson last wrote Scream 4 and Cursed.

Production: What we know about Scream 3?

Scream 3 Release Date: When was the film released?

Looking for more information on Scream 3?