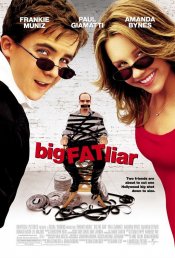 14-year-old Jason Shepherd (Frankie Muniz) has a reputation for stretching the truth. So, when big-time Hollywood producer Marty Wolf (Paul Giamatti) steals his class paper and turns it into a smash hit movie, no one believes Jason's latest tall tale! On a cross-country adventure to set the record straight, Jason and best friend Kaylee (Amanda Bynes) devise a high-tech plan to squeeze the truth out of Wolf through a series of outrageous pranks and crazy stunts.

A look at the Big Fat Liar behind-the-scenes crew and production team. The film's director Shawn Levy last directed This Is Where I Leave You and The Internship. The film's writer Dan Schneider last wrote Drake & Josh in New York!.

Production: What we know about Big Fat Liar

Big Fat Liar Release Date: When was it released?