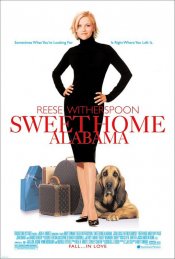 In this romantic comedy, a New York fashion designer suddenly finds herself engaged to the city's most eligible bachelor. But her past holds many secrets, including the redneck husband she married in high school, who refuses to divorce her. Bound and determined to end their contentious relationship once and for all, she sneaks back home to Alabama to confront her past, only to discover that you can take the girl out of the South, but you can never take the South out of the girl.

"Disenchanted" , "Transformers: Dark of the Moon"

Production: What we know about Sweet Home Alabama?

Sweet Home Alabama Release Date: When was the film released?

Sweet Home Alabama was released in 2002 on Friday, September 27, 2002 (). There were 2 other movies released on the same date, including The Tuxedo and Moonlight Mile.