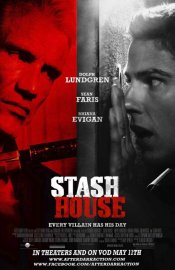 A couple find the perfect starter home. Upon moving in, a group of dangerous men arrive who will stop at nothing to get what's locked inside the couple's house.

Poll: Will you see Stash House?

A look at the Stash House behind-the-scenes crew and production team. The film's writer Gary Spinelli last wrote American Made and The Highest Bid.

Production: What we know about Stash House

Stash House Release Date: When was it released?

Stash House was released in 2012 on Friday, May 11, 2012 (Limited release). There were 16 other movies released on the same date, including Dark Shadows, The Cup and Hick.