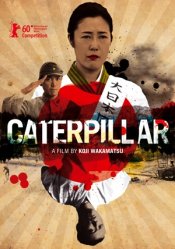 During the Second Sino-Japanese War, a village woman is given the grueling task of looking after her quadruple-amputee husband, a decorated solider tortured by memories of his war crimes.

Poll: Will you see Caterpillar?

Production: What we know about Caterpillar?

Caterpillar Release Date: When was the film released?

Caterpillar was released in 2011 on Friday, May 6, 2011 (Limited release). There were 15 other movies released on the same date, including Something Borrowed, Thor and Jumping the Broom.

Looking for more information on Caterpillar?