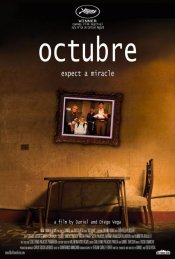 Clemente, a moneylender of few words, is a new hope for Sofía, his single neighbor, devoted to the October worship of Our Lord of the Miracles. They're brought together over a new-born baby, fruit of Clemente's relationship with a prostitute who's nowhere to be found.

Poll: Will you see Octubre?

A look at the Octubre behind-the-scenes crew and production team.

Production: What we know about Octubre?

Octubre Release Date: When was the film released?

Octubre was released in 2011 on Friday, May 6, 2011 (New York release). There were 15 other movies released on the same date, including Jumping the Broom, Thor and Something Borrowed.

Looking for more information on Octubre?