In Search Of The Truth 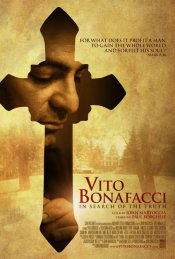 Vito Bonafacci is a successful businessman who enjoys his lifestyle and the riches he has accumulated, but all that changes when one night he dreams he is having a heart attack. In that dream his mother appears from her grave and pleads with him to abandon his pursuit of greed and materialism. When Vito wakes, he is deeply affected by this vision and this leads him on a soul-searching journey to understand his life’s purpose. In a series of encounters with family and friends, he questions and explores the meaning of faith and the role religion plays in tempering one’s soul.

original plot formulation based on information from vitobonafacci.com

Poll: Will you see Vito Bonafacci?

A look at the Vito Bonafacci behind-the-scenes crew and production team.

Production: What we know about Vito Bonafacci

Vito Bonafacci Release Date: When was it released?

Vito Bonafacci was released in 2011 on Friday, May 6, 2011 (New York release). There were 15 other movies released on the same date, including Jumping the Broom, Something Borrowed and Thor.