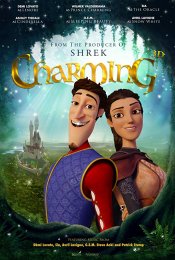 Charming is centered around a twist on fairy tale convention that involves all three princesses: Snow White (Avril Lavigne), Cinderella (Ashley Tisdale) and Sleeping Beauty (G.E.M.) who find that they are somehow engaged to the same man: Prince Charming (Wilmer Valderrama). Cursed as a child, Prince Philip Charming compulsively proposes to every woman he encounters, leaving a trail of lovesick ladies and scorned lovers to wreak vengeful havoc on the Kingdom. Ultimately, Prince Philip’s exasperated father, King Charming, gives the young Prince an ultimatum… Find a true, true-love before his 21st Birthday or lose all claim to the throne.

Poll: Will you see Charming?

Production: What we know about Charming

Production is underway at Cinesite’s animation studio in Montreal.

On or about September 30, 2014, the film was in Development status.

Charming Release Date: When was it released?

Charming was released in 2019 on Friday, August 2, 2019 (Limited release). There were 12 other movies released on the same date, including Fast & Furious Presents: Hobbs & Shaw, 15 Minutes of War and Otherhood.

Looking for more information on Charming?