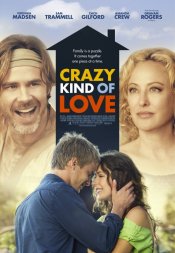 Follows Augusta (Virginia Madsen), whose idyllic life in Connecticut is thrown into disarray when she discovers her husband’s extramarital affair. Augusta suffers a nervous breakdown after her husband leaves, and her good-hearted stoner son is determined to comfort her with the help of his estranged older brother (Zach Gilford) and live in girl-friend (Amanda Crew.)

Poll: Will you see Crazy Kind of Love?

Production: What we know about Crazy Kind of Love

Production is set to start Fall 2011.

Crazy Kind of Love Release Date: When was it released?

Crazy Kind of Love was released in 2013 on Friday, May 31, 2013 (). There were 9 other movies released on the same date, including Now You See Me, After Earth and Ephraim's Rescue.

Looking for more information on Crazy Kind of Love?