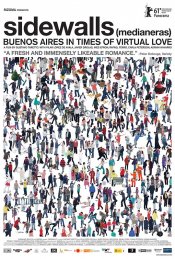 Martin is a neurotic web designer taking baby steps out of the isolation of his one-room apartment and his virtual reality. Mariana is an artist fresh out of a a long relationship. Her head is a mess, just like the apartment where she takes refuge. Martin and Mariana are perfect for each other-- they live in the same street, in opposite buildings, but they never meet. Can the movement of a modern city of three million people bring them together?

Poll: Will you see Sidewalls?

A look at the Sidewalls behind-the-scenes crew and production team.

Production: What we know about Sidewalls

Sidewalls Release Date: When was it released?

Looking for more information on Sidewalls?