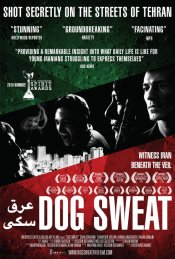 Using the subversive urgency of cinema verite, the lives of six young people unfold in present day Iran. Misunderstood by their families and oppressed by conservative Islamic society, they act out their personal desires behind closed doors.

Poll: Will you see Dog Sweat?

A look at the Dog Sweat behind-the-scenes crew and production team.

Production: What we know about Dog Sweat

Dog Sweat Release Date: When was it released?