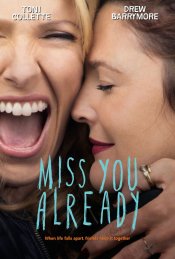 The story following two best friends, Milly (Toni Collette) and Jess (Drew Barrymore), as they navigate life's highs and lows. Inseperable since they were young girls, they can't remember a time they didn't share everything—secrets, clothes, and even boyfriends—but nothing prepares them for the day Milly is hit with life-altering news.

Poll: Will you see Miss You Already?

Crew: Who's making Miss You Already

Production: What we know about Miss You Already

Production is scheduled for this summer.

Miss You Already Release Date: When was it released?

Miss You Already was released in 2015 on Friday, November 6, 2015 (Limited release). There were 9 other movies released on the same date, including Spectre, The Peanuts Movie and Room.

Questions: Asked About Miss You Already

Looking for more information on Miss You Already?