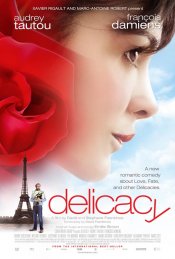 Audrey Tautou is Nathalie, a beautiful, happy, and successful Parisian business executive who finds herself suddenly widowed after a three-year marriage to her soul mate. To cope with her loss, she buries herself and her emotions in her work to the dismay of her friends, family and co-workers. One day, inexplicably, her zest for life and love is rekindled by a most unlikely source, her seemingly unexceptional, gauche, and average looking office subordinate, Markus (Francois Damiens). At first stunned by Nathalie's unexpected attention, Markus comes to gradually believe in her feelings and shifts into romantic high gear. As their relationship goes from awkward to genuinely loving, Nathalie and Markus will have to overcome a host of obstacles including everyone else's judgmental perceptions as well as their own self-doubts.

Poll: Will you see Delicacy?

A look at the Delicacy behind-the-scenes crew and production team.

Production: What we know about Delicacy

Delicacy Release Date: When was it released?

Delicacy was released in 2012 on Friday, March 16, 2012 (Limited release). There were 8 other movies released on the same date, including 21 Jump Street, Casa de Mi Padre and Seeking Justice.

Looking for more information on Delicacy?