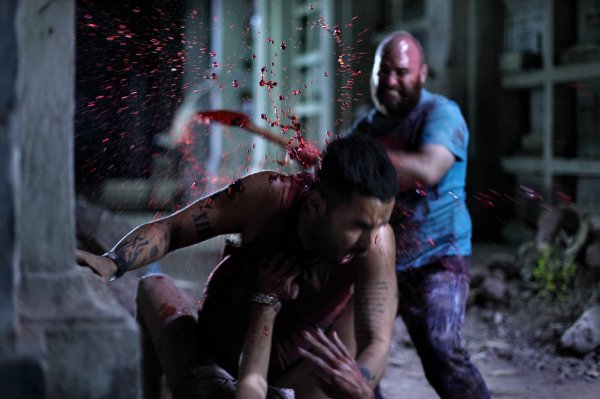 Chile has it all: gorgeous landscapes, smokin’- hot women, cool dudes, great wine, and the wildest parties. For a hapless American tourist, nicknamed Gringo (Eli Roth) by his two Chilean pals Ariel (Ariel Levy) and Pollo (Nicolás Martínez), the trip has been heaven on earth — except that he just can’t hook up with the ladies. Gringo’s luck seems to change when the group meets a trio of babes — Russian model Irina (Natasha Yarovenko), non-stop party girl Kylie (Lorenza Izzo) and her serious sister Monica (Andrea Osvárt) — who agree to accompany them on a trip to the coastal town of Valparaíso. The new friends are having the best of times whooping it up in a dance club, until a violent earthquake brings the entire city down around them. With this one-time paradise now a landscape of death and destruction that’s seething with terror and panic, our unlucky heroes must run for their lives from looters, escaped convicts, and the inevitable aftershocks.