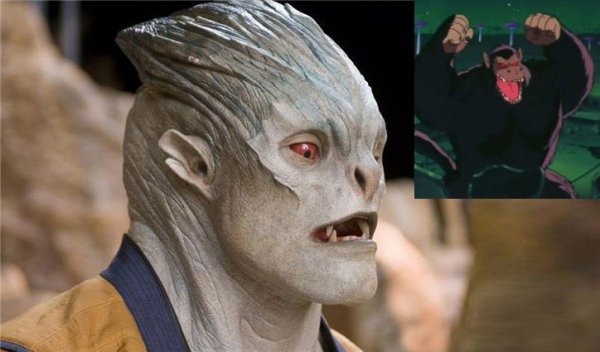 The motion picture "Dragonball: Evolution" features a cast of rising young stars and veteran acclaimed actors. Justin Chatwin, who portrayed Tom Cruise's son in Steven Spielberg's "War of the Worlds," takes on the role of the heroic Goku, a powerful warrior who protects the Earth from an endless stream of rogues bent on dominating the Universe and controlling the mystical objects from which the film takes its name. Emmy Rossum ("The Day After Tomorrow") is Bulma, a beautiful woman intent on retrieving the mystical Dragonballs for her own reasons; Jamie Chung ("Samurai Girl") is Chi Chi, a young martial artist who captures Goku's eye; and screen legend Chow Yun-Fat ("Crouching Tiger, Hidden Dragon") is Roshi, the Master who guides Goku on the young man's epic quest to save the Earth from the forces of darkness.

James Marsters ("Buffy the Vampire Slayer") is Lord Piccolo, whose return could signal the Earth's destruction; international performing sensation Joon Park is Yamcha, a charismatic "bad boy" whose schemes could thwart the heroes' journey; popular Japanese actress Eriko ("Heroes") is Mai, an assassin who works with Piccolo; Ernie Hudson ("Ghostbusters") is Sifu Norris, a Master and contemporary of Roshi's; and Randall Duk Kim ("The Matrix Revolutions") is Goku's grandfather Gohan, whose lessons for Goku begins to prepare the young man for the monumental tasks that lie ahead.