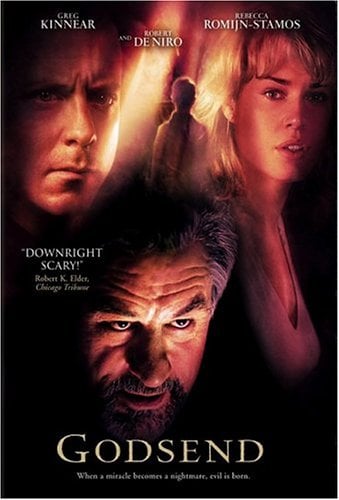 Following the death of their eight year old son on his birthday, Jessie (Rebecca Romijn-Stamos) and Paul (Greg Kinnear) are befriended by a doctor on the forefront of genetic research (Robert DeNiro) at the height of their mourning. He leads the couple in a desperate attempt to reverse the rules of nature and clone their son. The experiment is successful and under Richard's watchful eye, Adam grows into a healthy and happy young boy, until his 8th birthday. As time goes by, the Duncan's gradually start to see small, subtle differences between the new Adam and the Adam they lost. At the time of the new Adam's eighth birthday, the changes in character are more pronounced. Adam grows distant and fearful as a palpable sense of menace settles within the young boy. This Adam begins to suffer from night terrors and frightening flashbacks as a sinister personality begins to emerge. Paul and Jessie cannot escape the fact that this Adam is different. Terror settles on the couple as they try to come to terms with just what they have done, or what has been done to them.