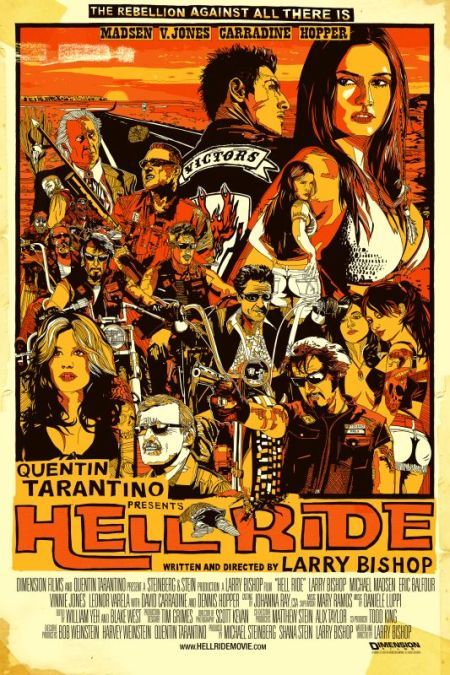 "Hell Ride" is a raucous throwback to the days of the Sergio Leone spaghetti western, with a heaping helping of testosterone-fueled chopper action thrown into the mix. Writer/director Larry Bishop takes on a third role as Pistolero, head honcho of the Victors, a group of badass bikers who are out to avenge the murder of one of their members at the hands of the 666ers, a rival gang whose actions live up to their hellish moniker. Along with his cohorts, the Gent (deviously portrayed by Michael Madsen) and the mysterious Comanche (Eric Balfour), Pistolero aims to take down the Deuce and Billy Wings, menacing leaders of the 666ers, but a mutiny looms on the horizon when his commitment to profit is questioned by a few of his fellow Victors. An even larger story unravels when previously unknown information about Comanche resurrects ghosts from Pistolero's past.

Although there is enough sex, violence, and all-out machismo to keep grind-house fans firmly plastered to their seats, Bishop's take on the genre strays far from exploitation as he weaves a twisting, multilayered tale of revenge, loyalty, and brotherhood that is brought to life by a superb ensemble cast, with memorable performances by Dennis Hopper, Vinnie Jones, and David Carradine. In the words of Comanche, "The road to hell is paved with anything but good intentions."