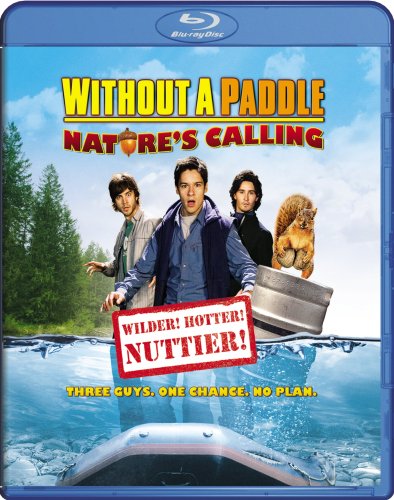 Without a Paddle: Nature's Calling Plot

Zach and Ben have been best buddies since they were in grade school. They were those "two guys" that we all know, opposites, but still the same kid. Their friendship continued through High School. Zach continually got them in trouble due to his carefree existence, and Ben was oblivious to everything as he became smitten by the girl of his dreams. Just as Ben got the nerve to pursue her, she moved out of the neighborhood, leaving Ben devastated for many years to come. Twelve years later, Ben and Zach, now in their mid-20's, still close friends, but have drifted apart due to making different choices in life. Ben is overworked and doesn't spend time doing the things he loves. He buries himself day and night in his work at a law firm. The only thing outside of work Ben has focused on is his life-long crush on the girl he met years ago in high school. Zach, an easy-going guy who enjoys everything he does, happily spends his days taking care of the elderly at a nursing home. Zach's only problem is that he always speaks his mind and sometimes doesn't see the repercussions of his words or actions until its too late. Zach misses spending time with his friend, but doesn't know how to wake him up and get him to start living his life again. Zach's chance comes when a dying patient at the retirement home begs him to find her granddaughter, whom she desperately wants to see her before she dies. When Zach sees her photo, he can't believe his eyes! It's Ben's long, lost crush, Heather. She has gone into the woods to save the environment, and has been missing for seven years. Zach talks Ben into taking off time to go on this adventure of a lifetime. If they find Heather, Ben can finally tell her how he's felt all these years! Our two friends head out on the river, along with Heather's sophisticated British cousin, Nigel, to see if she is truly alive and living in the trees. Along the way, they need to re-connect as friends to overcome many obstacles, including some drunk townsfolk, obsessed hillbillies, a haunted river, an army of squirrels, a mad genius and two goons that are secretly following Nigel. All just to re-start a friendship and to find the one girl who got away.

Like this Without a Paddle: Nature's Calling Blu-ray Cover—Share It!

More Without a Paddle: Nature's Calling 4