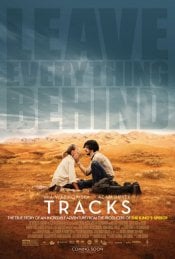 Tells the remarkable true story of Robyn Davidson (Wasikowska), a young woman who leaves her life in the city to make a solo trek through almost 2,000 miles of sprawling Australian desert. Accompanied by only her dog and four unpredictable camels, she sets off on a life-changing journey of self-discovery. Along the way, she meets National Geographic photographer Rick Smolan (Driver) who begins to photograph her voyage.

Poll: Will you see Tracks?

A look at the Tracks behind-the-scenes crew and production team.

Production: What we know about Tracks

Tracks Release Date: When was it released?

Tracks was released in 2014 on Friday, September 19, 2014 (New York / Los Angeles release). There were 11 other movies released on the same date, including This Is Where I Leave You, A Walk Among the Tombstones and Reclaim.

Looking for more information on Tracks?