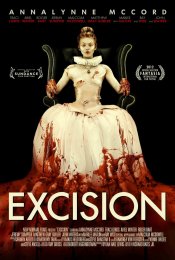 Alienated teen Pauline (AnnaLynne McCord) struggles with the pressures of fitting into high school, pleasing her parents and a burning desire to lose her virginity. With a grotesque curiosity for the darker side of life, Pauline is considered a social outcast by everyone around her. Enticed by flesh, she retreats into her own fantasies and hopes to become a great surgeon...that is if she doesn't go mentally insane first.

Poll: Will you see Excision?

Production: What we know about Excision

Excision Release Date: When was it released?

Looking for more information on Excision?