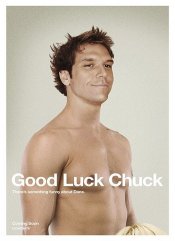 Jessica Alba and Dane Cook star in a story about a guy stuck in a pattern of cursed relationships--lucky for everyone else but him.

It all started when Charlie Kagan was 10 years old. Breaking the cardinal rules of spin-the-bottle, Charlie refused to lip-lock with a demented Goth girl--and she put a hex on him. Now, 25 years later, Charlie is a successful dentist... and still cursed. While his plastic surgeon best friend, Stu, pursues as many of his patients as possible, Charlie can't seem to find the right girl. Even worse, he discovers at an ex-girlfriend's wedding that every woman he's ever slept with has found true love--with the next guy after him. Before he knows it, Charlie's reputation as a "good luck charm" has women--from sexy strangers to his overweight receptionist--lining up for a quickie. But a life filled with all sex and no love has Charlie lonelier than ever--that is, until he meets Cam. An accident-prone penguin specialist, Cam is as hard-to-get as she is beautiful. But when a genuine romance develops, Charlie realizes he's got to find a way to break his good-luck curse... before the girl of his dreams winds up with the next guy she meets.

Production: What we know about Good Luck Chuck

Good Luck Chuck Release Date: When was it released?

Good Luck Chuck was released in 2007 on Friday, September 21, 2007 (). There were 5 other movies released on the same date, including The Jane Austen Book Club, Sydney White and Into the Wild.