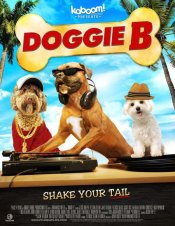 When aspiring vet Cassie finds out that her Uncle Peter’s dog dancing studio is in danger of closing, she enters her devoted pup Pijo in the Dog Dancing Championships. Standing between the grand prize and the glory is ten-time champion Gertrude and her dancing canine Chaos, who will stop at nothing to win. With the help of family and friends, Cassie and Pijo lace up all six dancing shoes, raise the woof, and take on the competition tail on.

Poll: Will you see Doggie B?

Crew: Who's making Doggie B

A look at the Doggie B behind-the-scenes crew and production team.

Production: What we know about Doggie B

Doggie B Release Date: When was it released?

Doggie B was released in 2012 on Friday, August 31, 2012 (Limited release). There were 6 other movies released on the same date, including The Possession, The Good Doctor and The Tall Man.

Questions: Asked About Doggie B

Looking for more information on Doggie B?