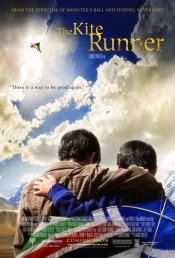 A man grows up in California is forced as an adult to return to his native Afghanistan to right a long-standing wrong and rescue the son of a childhood friend.

Spanning from the final days of Afghanistan's monarchy to the atrocities of the Taliban reign, an epic tale of fathers and sons, of friendship and betrayal, an unlikely friendship develops between Amir, the son of a wealthy Afghan businessman, and Hassan, a servant to Amir and his father. During a kite-flying tournament, an unspeakable event changes the nature of their relationship forever. As an adult haunted by the childhood betrayal, Amir seeks redemption by returning to his war-torn native land to make peace with himself and reconcile his cowardice.

Poll: Will you see The Kite Runner?

The Kite Runner Cast: Who are the actors?

Crew and Production Credits: Who's making The Kite Runner?

A look at the The Kite Runner behind-the-scenes crew and production team. The film's director Marc Forster last directed Disney's Christopher Robin and All I See Is You. The film's writer David Benioff last wrote Gemini Man and Brothers.

Production Timeline: When did the The Kite Runner come together?

The Kite Runner Release Date: When was it released?

The Kite Runner was released in 2007 on Friday, December 14, 2007 There were 4 other movies released on the same date, including Alvin and the Chipmunks, I Am Legend and Youth Without Youth.

Looking for more information on The Kite Runner