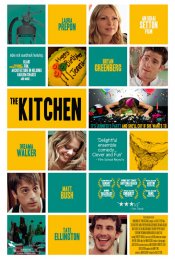 Jennifer (Laura Prepon) is turning 30 and her best friend, Stan (Matt Bush), is throwing her a party. But she is in no mood to celebrate. She just left her job, as well as her cheating boyfriend, Paul (Bryan Greenberg). Her cynical little sister Penny (Dreama Walker) is threatening to overshadow the whole affair with the most inappropriate party announcement. And she is pretty sure she's too old to still be living with her creepy roommate. What starts out as a well-intentioned day of celebration quickly spirals into a most ill-fated disaster, from an ex-boyfriend who can't "get enough" to the bands dueling in the backyard and from disloyal friends showing their true colors to a manic-depressive party photographer who may have forgotten to take his meds. In this hilarious ensemble comedy set entirely inside a kitchen, turning 30 has never looked this chaotic!

Poll: Will you see The Kitchen?

Crew: Who's making The Kitchen

A look at the The Kitchen behind-the-scenes crew and production team.

Production: What we know about The Kitchen

The Kitchen Release Date: When was it released?

The Kitchen was released in 2013 on Friday, March 15, 2013 (). There were 12 other movies released on the same date, including The Incredible Burt Wonderstone, The Call and Upside Down.

Questions: Asked About The Kitchen

Looking for more information on The Kitchen?