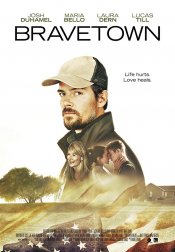 Follows Alex, an Army veteran and counselor in a small town who takes a casual approach when treating Josh (Lucas Till). Alex slowly earns his patient’s trust and respect, but their camaraderie is challenged when Josh makes a shocking discovery.

Poll: Will you see Bravetown?

Production: What we know about Bravetown

Bravetown Release Date: When was it released?

Bravetown was released in 2015 on Friday, May 8, 2015 (Limited release). There were 11 other movies released on the same date, including Hot Pursuit, Noble and Skin Trade.

Looking for more information on Bravetown?