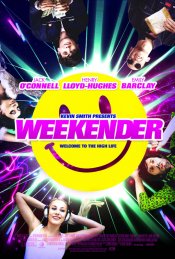 Chosen by the man himself, the Kevin Smith Movie Club presents Weekender. The rave scene has arrived from Ibiza and warehouse parties are exploding across the UK, bringing phenomenal wealth to the organizers. In Manchester, best friends Matt and Dylan are in their early 20s and want to be a part of this social scene. They are taken on a wild journey from the exclusive VIP rooms of London clubs to the outrageous parties in Ibiza super-villas. But as their success continues to grow, they attract a more dark and sinister world.

Poll: Will you see Weekender?

A look at the Weekender behind-the-scenes crew and production team.

Production: What we know about Weekender

On or about September 7, 2013, the film was in Completed status.

On or about September 7, 2013, the film was in Completed status.

Weekender Release Date: When was it released?

Weekender was released in 2013 on Friday, September 20, 2013 (Limited release). There were 16 other movies released on the same date, including Prisoners, Battle of the Year and The Little Mermaid (Second Screen Live).

Looking for more information on Weekender?