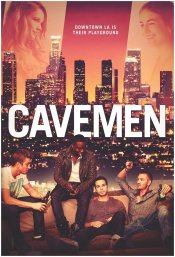 Follows LA playboy Dean (Skylar Astin) who is fed up with one-night-stands and empty relationships and realizes that he wants something more out of life than just a party. With a little inspiration from his nine-year-old nephew and his best friend Tess (Camilla Belle), Dean decides to try his hand at finding true love for the first time - which proves to be much more difficult than he thought in modern-day Los Angeles.

Poll: Will you see Cavemen?

"Survive the Game" , "The Fortress"

Production: What we know about Cavemen?

Cavemen Release Date: When was the film released?

Cavemen was released in 2014 on Friday, February 7, 2014 (Limited release). There were 9 other movies released on the same date, including Vampire Academy, The LEGO Movie and The Monument's Men.

Looking for more information on Cavemen?