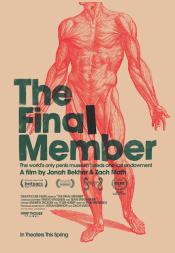 Paris has the Louvre, London has the Tate Modern, and New York the Metropolitan Museum. But Husavik, Iceland-a diminutive village on the fringe of the Arctic Circle-boasts the world's only museum devoted exclusively to painstakingly preserved male genitalia. Founded and curated by Sigurður "Siggi" Hjartarson, the Icelandic Phallological Museum houses four decades worth of mammalian members, from a petite field mouse to the colossal sperm whale, and every "thing" in between. Lamentably, Siggi's collection lacks the holy grail of phallic phantasmagoria: a human specimen. Siggi's world changes dramatically when he receives generous offers from an elderly Icelandic Casanova and an eccentric American. However, as the competition for eternal penile preservation heats up between the two men, Siggi soon discovers that this process is more complicated than it initially appeared.

Poll: Will you see The Final Member?

A look at the The Final Member behind-the-scenes crew and production team.

Production: What we know about The Final Member?

The Final Member Release Date: When was the film released?

The Final Member was released in 2014 on Friday, April 18, 2014 (Limited release). There were 11 other movies released on the same date, including A Haunted House 2, Cuban Fury and Bears.

Q&A Asked about The Final Member

Looking for more information on The Final Member?