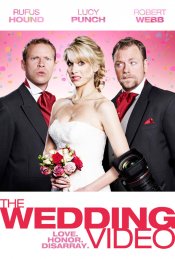 hen Riaf is asked to be the best man at his brother Tim's high-society British wedding, he decides to make a no-holds-barred documentary of everything that happens leading up to the big day and give it as a gift to the happy couple. As the moment of matrimony approaches, nothing seems to be going according to plan, leaving the bride and groom to wonder, "Whose wedding is this anyway?"

Poll: Will you see The Wedding Video?

Into the Woods, Yellow

H is for Happiness, Harry Potter and the Chamber of Secrets

An Evening With Beverly Luff Linn

A look at the The Wedding Video behind-the-scenes crew and production team. The film's director Nigel Cole last directed A Lot Like Love and Calendar Girls.

Production: What we know about The Wedding Video?

The Wedding Video Release Date: When was the film released?

Q&A Asked about The Wedding Video

Looking for more information on The Wedding Video?