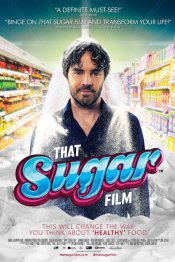 That Sugar Film is one man’s journey to discover the bitter truth about sugar. Damon Gameau embarks on a unique experiment to document the effects of a high sugar diet on a healthy body, consuming only foods that are commonly perceived as ‘healthy’. Through this entertaining and informative journey, Damon highlights some of the issues that plague the sugar industry, and where sugar lurks on supermarket shelves.

Poll: Will you see That Sugar Film?

Crew: Who's making That Sugar Film

A look at the That Sugar Film behind-the-scenes crew and production team.

Production: What we know about That Sugar Film

That Sugar Film Release Date: When was it released?

That Sugar Film was released in 2015 on Friday, July 31, 2015 (Limited release). There were 11 other movies released on the same date, including Mission: Impossible - Rogue Nation, Southpaw and The Seventh Dwarf.

Questions: Asked About That Sugar Film

Looking for more information on That Sugar Film?