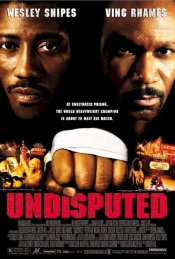 A heavyweight-boxing champ is accused of raping a woman and sent to prison. There he faces the prison-boxing champ.

Poll: Will you see Undisputed?

Next, The Thing About My Folks

One for the Money, Hail, Caesar!

Lockdown, King of the South

The Hills Have Eyes 2

A look at the Undisputed behind-the-scenes crew and production team. The film's director Walter Hill last directed The Assignment and Bullet to the Head.

Production: What we know about Undisputed?

Undisputed Release Date: When was the film released?

Undisputed was released in 2002 on Friday, August 23, 2002 (). There were 2 other movies released on the same date, including S1m0ne and Serving Sara.

Looking for more information on Undisputed?