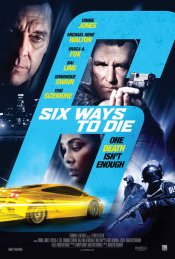 Sonny "Sundown" Garcia is the top cocaine distributor in the United States, which has made him a very rich and powerful man. It has also made him plenty of enemies. John Doe is just such a man. A nameless man of mystery, John lives to see Sundown not just dead, but to suffer six meaningful losses before his death—his fortune, his freedom, his love, his reputation, his most valuable possession and, finally, his life. John hires six hit-men, each one assigned to inflict one of the six meaningful losses upon Sundown.

Crew: Who's making 6 Ways to Die

A look at the 6 Ways to Die behind-the-scenes crew and production team.

Production: What we know about 6 Ways to Die

6 Ways to Die Release Date: When was it released?

6 Ways to Die was released in 2015 on Friday, July 31, 2015 (Limited release). There were 11 other movies released on the same date, including Mission: Impossible - Rogue Nation, Southpaw and The Seventh Dwarf.

Questions: Asked About 6 Ways to Die

Looking for more information on 6 Ways to Die?