Back in Time Movie 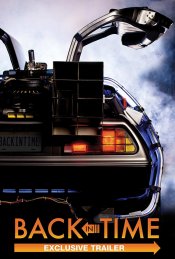 Back in Time looks at both the making of the original Back to the Future film and the fan culture that has developed over the years.

In Back in Time, cast, crew, and fans explore the classic time-travel trilogy’s resonance throughout pop culture. As the project evolved it took them from the joyous nostalgia at a massive London fan event to the living rooms of Michael J. Fox, Robert Zemeckis, Steven Spielberg, Bob Gale, Lea Thompson and Christopher Lloyd as well as Huey Lewis, James Tolkan (“Mr. Strickland”) Claudia Wells (“Jennifer Parker”) and more. Nothing is overlooked as they explore everything from Eric Stoltz’s casting to the invention of the hoverboard. Travelling throughout the world and leaving no stone unturned brings unparalleled behind-the-scenes access to the “BTTF” lexicon.

Poll: Will you see Back in Time?

Crew: Who's making Back in Time

A look at the Back in Time behind-the-scenes crew and production team.

Back in Time Trailers & Videos

Production: What we know about Back in Time

Back in Time Release Date: When was it released?

Questions: Asked About Back in Time

Looking for more information on Back in Time?